I know a lot of people that have started their own company, and I have even more anecdotes from forums and other sites on the web. I’ve noticed that there are two types of entrepreneurs. The dreamers and the doers. 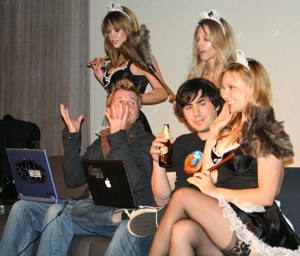 Kevin Rose, the founder of Digg.com showing the dreamers how to run a company

The dreamers often have a romantic view of what it means to be an entrepreneur. They’ve seen Kevin Rose of Digg fame, they’ve seen Larry and Sergey and they think they can do it too. When they read about what made the stars what they are all they see is the success story that they want to be. They’re helped along by the fact that successful founders rarely tell you about the pain they went trough, the long nights and the futile attempts at stardom they encountered before their eventual success. And since very few people that didn’t make it for one reason or another have the guts to tell the world about it you’ll probably never read about the outright failures. These are the vast majority.

The dreamers get their cues from secondary sources, PR material, and success stories posted on Techcrunch so they have a skewed view of what it takes to do a startup. The media, the blogs and almost all other sources of information are heavily biased towards the successes. Who wants to write about the failures? Who wants to write about the boring stuff Kevin Rose does every day to keep Digg alive, let alone the countless hours he presumably spent getting it to where it is today? Stories about fuck-you money, private planes, champagne and oysters are much more fun. This bias in information gives the dreamers a wrong view of what doing a startup is all about, and what it takes to succeed.

The problem, of course, is that this is wrong. Doing a startup is hard. Your chances of success aren’t good. A great idea is simply a starting point. The doers know this. They know that the odds are stacked against them and that they have to work hard just to survive. They know that a great company is built one customer at a time, and often requires years of hard work before it becomes successful. They know, and more importantly they act. They get stuff done. 99% of the work required in a startup isn’t sexy, but they know that if they don’t do it nobody will. They sweep the floors and clean the toilets.

So how do you know the difference between a dreamer and a doer? Here are some cues.

Most entrepreneurs start out as dreamers. After all, the dream of freedom, riches, oysters and champagne are appealing. I would even say that you need to have a bit of a dreamer in you to even attempt to do a startup. But the pragmatic dreamers soon realise the extent of what they have gotten themselves into and become doers. They realise that companies are built one small step at a time. And they get to work.